Don’t have enough money to attend a concert? KBS World got your back! K-pop fans can now take their lightsticks out of the closet and rehearse their fandom chants as starting October 4 to 29, the broadcasting channel will present an online K-pop compilation concert of the biggest K-pop acts in the K-pop scene! This includes BTS, IU, EXO, SHINee, TWICE, and more!

Keep reading to know the groups in the lineup and more details about the online compilation concert! 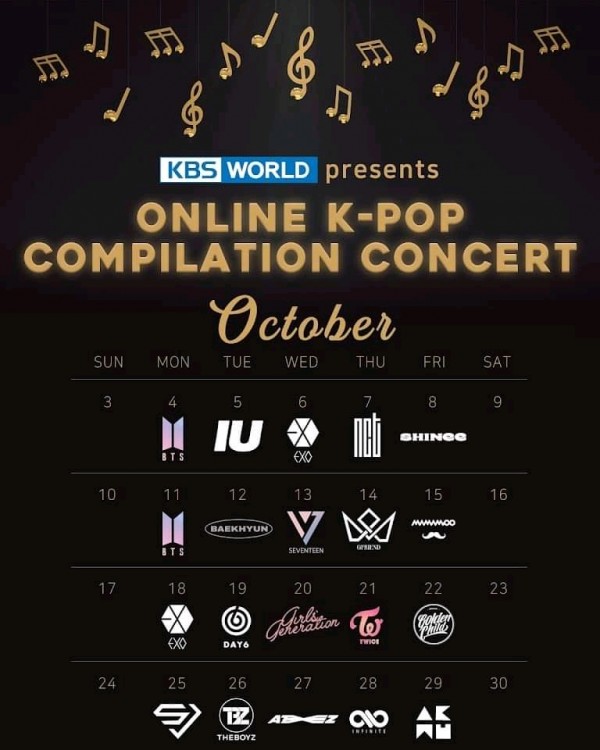 In this program, K-pop enthusiasts can now fan girl or fan boy at their comfort – wherever they are in the world!

In particular, starting on October 4, the streaming service platform will provide a compilation of your favorite K-pop stars’ performances — as if you are watching a concert.

Amidst the pandemic, offline concerts were put on hold to prevent the spread of the coronavirus. Since then, the music industry has adopted on-tact (online and non-contact) concerts which allow global fans to communicate and interact with their idols despite being home.

This online concert shares a similar concept, aside from it’s not live and these are a compilation of K-pop idols’ previous stages.

Nevertheless, the best thing about this concert is — IT’S FREE!

In the promotional poster uploaded by KBS World TV on its social media channels, 20 K-pop idols and groups are in the lineup.

Starting next week, specifically on the 4th, global K-pop star BTS will open the program with their best stage performances. The group will also appear on Oct. 11 – the continuation of their compilation concert.

In particular, BTS who stopped going on offline concerts when the pandemic broke out will resume their offline tour concert in November and December.

The offline concert “BTS PERMISSION TO DANCE ON STAGE – LA,” will be held in Los Angeles, and more details are expected about the concert and ticket reservation will be available through their official fan community platform, Weverse.

Following BTS, the “Nation’s Sweetheart” IU will also have her online compilation concert on Oct. 5. Known as one of the idols which K-pop fans want to attend the most, this is truly a gift to K-pop fans who are yet to attend the female icon’s concert offline.

On Oct. 6 to 8, EXO, NCT, and SHINee will appear in the program as scheduled, respectively. Super Junior, Baekhyun also joined the lineup.

For female groups, fans are also expected to see the incredible stages of MAMAMOO, Girls’ Generation, GFRIEND, and TWICE.

Here’s the complete lineup and schedule:

On the other hand, KBS World’s “Online K-pop Compilation Concert,” will be aired on weekdays starting Oct. 4 to Oct.29, at 10 p.m. KST.